This past August, Jay Kehne, our Conservation Associate and Range Rider Pilot Project manager, got a call from one of our ranching partners who grazes over two hundred head of cattle on an allotment in the Colville National Forest, within the territory of one of Washington’s wolf packs.

With funding help from Conservation Northwest and the Washington Department of Fish & Wildlife (WDFW), these ranchers have been using diligent range riding and other non-lethal conflict avoidance methods in this area for several years. The program has been a great success, and since the range rider has been in place the herd has experienced no confirmed depredations from wolves or other predators.

But this year, the wolf pack had chosen a rendezvous site for its adolescent pups very near where the ranchers were moving their herd in preparation for bringing them in for the season. The ranchers and range rider had been supervising the herd around the clock, and no conflicts had yet occurred, but they were rightfully nervous about the wolves’ new location.

As partners in wolf-livestock conflict prevention, the ranchers wondered if Jay and some Conservation Northwest staff could come out for a few days to give the range rider a rest and help provide some extra eyes on the situation.

Heading out to lend a hand

Happy to do what we could to help, Jay rallied myself, Conservation Associate Alison Huyett, and an experienced volunteer from Spokane to come lend a hand.

We packed our tents, binoculars, boots and bear spray, and headed out to remote northeast Washington to see if we could help keep the rancher’s cows and the wolf pack from getting into trouble. For me, it felt like packing and heading off for hunting season two months early, but this time toting a camera and airhorn instead of a deer rifle.

After getting the lay of the land and some training from the rancher on working around cows and calves, we began patrolling the area. Driving rough forest service roads and hiking brushy game trails, we were out until dark monitoring for injured, sick or separated livestock.

At the same time, we also provided an extra level of human presence to help deter the wolves from thinking that the valuable cows and calves might be unprotected prey. 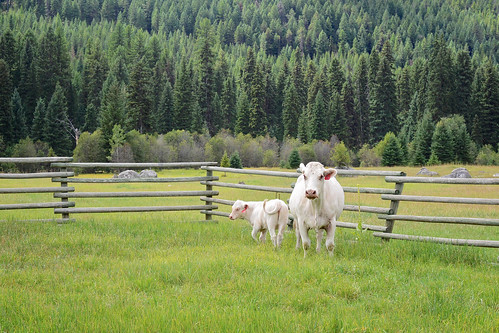 An injured cow we found with her young calf. The ranchers quickly brought this pair down, placing them in a protected corral until the cow had healed. Photo: Chase Gunnell

Using the range rider’s knowledge, and if they were available, howling, scat and tracks, we also tried to keep tabs on the location of the wolf pack. And when our pre-dawn coffee was interrupted by a chorus of barks and howls that sent the cows running, we split up and headed into the thick timber.

Our goal was to use human presence and noisemakers to push the wolves away from the core of the grazing allotment, and towards a nearby roadless area. Hopefully it was a move that would protect both the cows and the wolf pack from potentially lethal trouble.

While other members of our team began hiking up the valley bottom where the wolves and the main group of cows and calves were located, the rancher dropped Jay and I off at points on the ridge above. With luck, our locations would prevent the pack from doubling back towards another group of cows we had located in a meadow the evening before.

As I moved carefully (and loudly) downslope, the howls and barks coming from in front of me began to move off up the ridge to my right. Sure enough, with a few more howls from the mother wolf telling her “teenage” pups to come along, the pack took off. It wasn’t the exact location we’d been hoping they would go, but it was away from the cows and deeper into the thick woods.

At least for the time being, the pack had moved on. 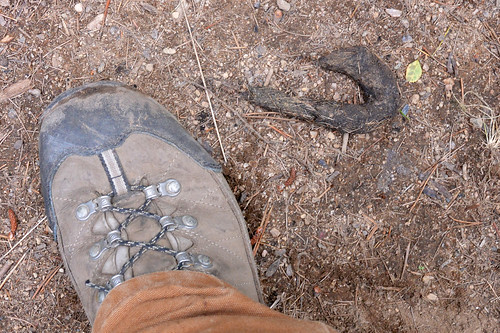 Fresh wolf scat found during our patrols. Range riders regularly check wolf scat to make sure it doesn’t contain cow hair, which might alert them to a depredation. This scat is full of deer hair. Photo: Chase Gunnell

Learning to coexist on the range

We later learned that the wolves did eventually return to their rendezvous site. But as the herds come home for the end of the 2014 grazing season, the ranchers are reporting no cows or calves lost to predators. It seems that thorough range riding, smart livestock management, and maybe even the extra boost from our Conservation Northwest team helped keep things free from conflict.

And despite their close proximity to cattle much of the summer, the wolf pack has so far been content to leave livestock alone. If their scat is any indication, they’ve been feeding on the healthy populations of elk, white-tailed deer, moose and wild turkeys found in the area. Many of which we saw during our trip, not to mention a big black bear!

For our team, it was a hands-on experience of just how range riding actually works. We talk about this program regularly and support the work of these modern day cowboys and cowgirls through funding, expert training and other resources. But for me, it was my first experience actually stepping into the boots of a range rider in wolf country. 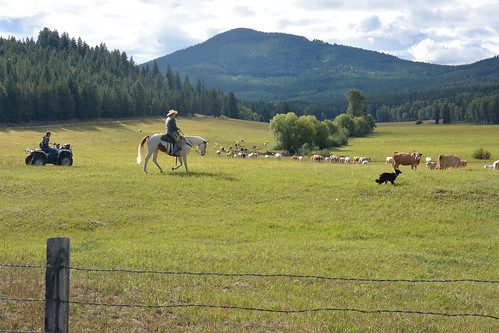 Ranchers and their herding dog rounding up the cattle. If grazing is rotated and managed responsibly, open areas like this meadow can provide defensible space for the cows and calves. Photo: Chase Gunnell

Beyond seeing firsthand the real challenges that ranchers in wolf country face, and how having a good cowboy can help prevent conflicts between predators and livestock before they even begin, I came away with renewed admiration for both wolves and cattlemen.

This was a hardworking family making a living in a wild place, and they don’t want to lose their livestock or their way of life. But they also have a sincere desire to use responsible grazing strategies and predator conflict avoidance methods to leave that wild place better than they found it. They held high respect for the land and for their new toothy neighbors, understanding that wolves are a natural part of where they’ve chosen to live and work. And that just killing them was neither an ethical or effective option for stopping potential problems.

More than just memories and pride from helping our ranching partners, our team also brought back practical experience and first-hand knowledge that will help guide our range riding program, and my communications, well into the future.

Despite the wolf-livestock conflicts publicized so much in the Northwest media recently, and the supercharged opinions on both sides of the wolf debate, after our trip this summer I’m as confident as ever that hardworking people collaborating with respect can make wolf recovery a success. And that Washington can still be a state where native predators returning to the landscape works in the long run for wolves, wildlife and people, too.

On-the-ground collaborations with our ranching partners in Eastern Washington are proving that this goal is achievable.